Another parallel between Watchtower Society and Greens

The flooding of the public with headscarf women is impressive. This flooding says that in the future Islam will take over Europe. Among the headscarf women there are also some sex aliens with headscarves. Young Muslims demonstrate their sexual attractiveness by wearing bras over their shirts and the Muslim has to control himself badly in order not to strike in the manner determined by the Koran. Because Islam forbids him to rape women with headscarves.

Women without headscarves are subject to general permission to be raped.

It is amazing with which discipline Muslims keep to their prohibitions, although the sexual stimuli are so blatant. This Muslim discipline is reminiscent of the zeal of the Watchtower slaves, who can easily deny the most insistent facts. The religious world is liberated from all logic and even sexual impulses can be successfully suppressed. Islam complies for long stretches entirely with such requirements that are also peculiar to the Watchtower religion, and the Watchtower doctrine even contains a ban on human blood. 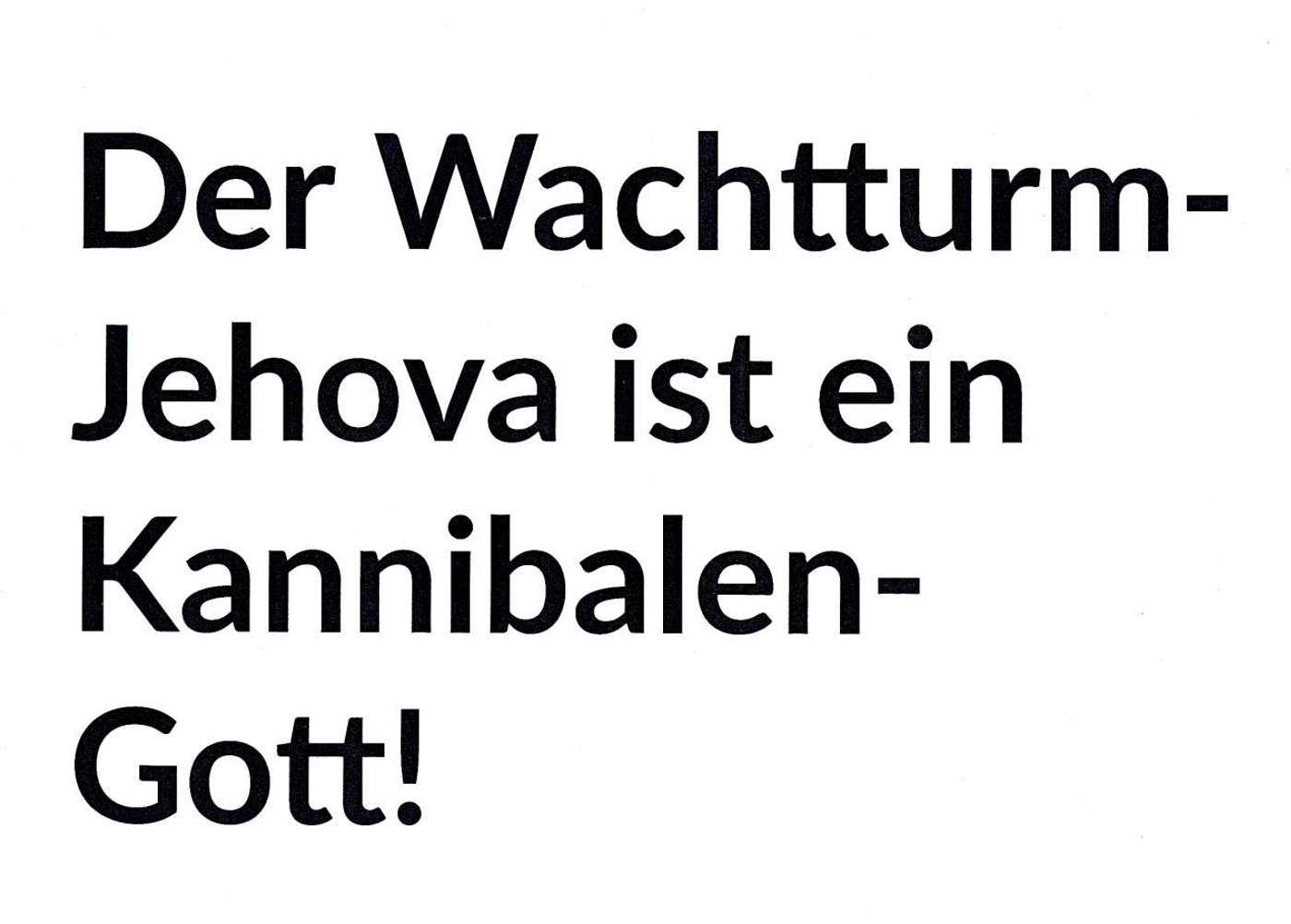 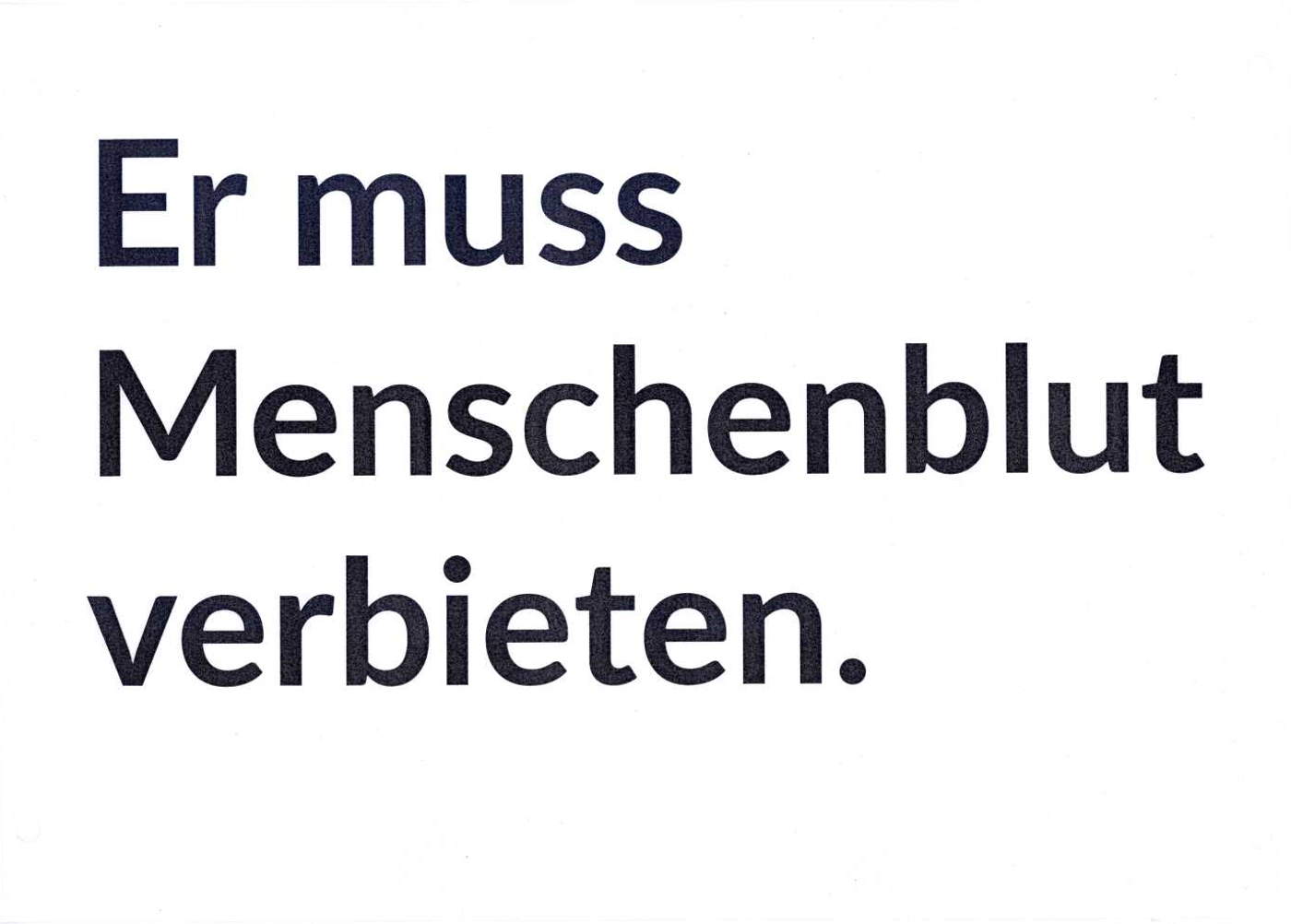 He must forbid human blood. By prohibiting the ingestion of human blood, the Watchtower Jehovah himself identifies his subjects as cannibals. As little as a speed limit of 120 km per hour cannot be imposed on a pedestrian, so little can the human blood ban affect a non-cannibal. But Jehovah's Witnesses are affected by this ban and they are proud of it.

That's why I carried two signs through the Heilbronn pedestrian zone: "The Watchtower-Jehovah is a cannibal god!" and "He must forbid human blood." Two Jehovah's Witnesses disappeared low-flying in a fast food restaurant. The people in the pedestrian zone immediately understood the correlation. And many took note of this simple fact of cannibalism.

A man approached me and afterwards I suspected that he must have been a Freemason of the lower degrees or at least strongly influenced by this religion. The man always stood very close to me in order to cover the signs as far as possible. He gave the usual left-green "wisdom" of himself. As soon as I gave him facts from Islam, he said: "I don't care!" When he left, he said, "You're gonna get a bar!"

In view of the planned introduction of Sharia law in Europe in the long term, a left-Green dictatorship seems downright harmless. But nobody notices that the sandbox game Watchtower Society is being implemented one-to-one both in the left-green dictatorship and by the Sharia. The bottom line is that we all face a dictatorship that is either deadly like a watchtower, or that results in the global communism of the Greens, or that establishes right-wing extremist Islam. All three are highly anti-Semitic. What does that tell us?

Charles Taze Russell was the Masonic founder of the Watchtower Society and became known as a notorious breast grabber. At some point he made a written vow that he would never again be alone in a room with one person without leaving the door open.

Yesterday I heard a conversation from a retired history teacher and a history student. The student distinguished several times the taboo that no teacher may be alone with a pupil in a room. He said several times: "That would be the end!"

The parallel between the green-left world at the universities and the Watchtower Society is obvious.